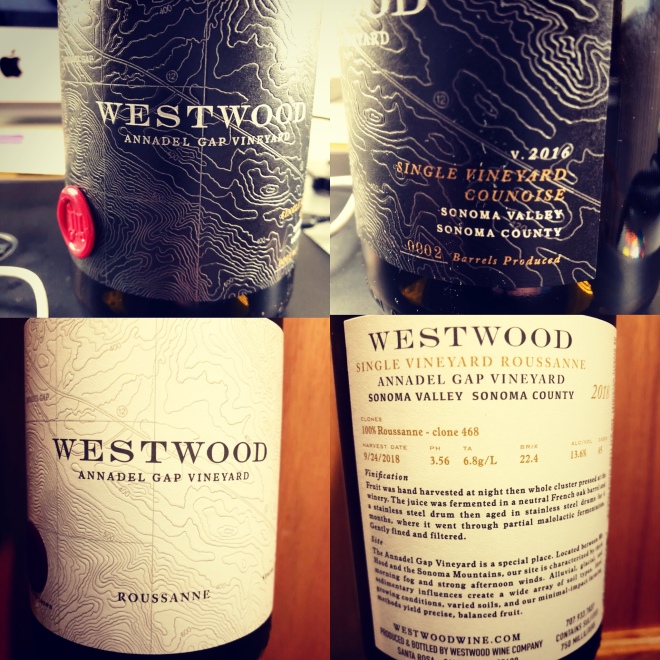 Hard to decide which to begin with, how or where, why, as both seemed narrative and impassioned, distinct impressions and translations of each voice.  Knowing what I know about Westwood I knew I’d be taken in some syllabic way.  So I started the other night with the Counoise, a character I’ve always had a strange sort of flirtation toward since I tasted one for the first time, about 4 years ago in Dry Creek.  What separated this from any template or attempted molding or re-molding of Counoise was the demeanor…. The symmetric mood of her steps.  Fruit or earth, spices and barrel visibility all sank and synced with my read of the rhythm in the wine’s composition.  There was a bright love and kind and precise verse to her. I couldn’t leave the ride, I must have had three glasses before leaving her, going to bed, maybe scribbling a couple notes then somewhat decided to end.  Not an additive to a blend, but a promises and loud, singing, mythology of a wine type.

The next I opened last night, and this song was different.  Like the Counoise which is often just dismissively dismissed and shoved to the side, if the person has even heard of her before, show more than an interplanetary and dimensional intent.  There is a rhetoric of place and approach in sip syncopation that has you found and joyously locked… the cloaked but altogether apparent apple and pineapple and peach helix, amplified by the shy lavender and shadowed vanilla touches.  This song had me thinking and scribbling madly.  I caught myself trying to word and write what exactly I was tasting, like apple and something tropic or bright, but I could only find myself meditating in the tangible and intangible texture, and consistency, empirical beat of the wine, her state and spoken atmospheric apparition… the Road she had me on.  Saw myself pouring a glass for self and one of my winemaker friends, asking them what they thought, not what they think she is but tell what’s being said to you.  Enigmatic and sensual static, from sip first to last.  This one as well, I had to tell self to halt, cork, put down pen and self-said to bed.