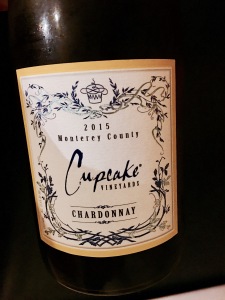 Lovely landing on palate from initial, it dances across your senses like an eager phantasm.  Fruit is all over the board, with what you’d expect from Chardonnay, with notes like apple and pair and bla, bla… but as well as some cantaloupe, white rose pedal and light mint.  It was musical and playful in a way I don’t usually get from Chardonnay.  And this is one of those offerings that tells you— “Don’t judge all Chardonnay for what others did to it in the past.” Valuable sagacity reiterated by this bottle, its composition and paragraphs, measures and scales.  It knocks and knocks, lightly then with a little more devotion, inviting you to notice new Chardonnay perspective.

Chardonnay is not one thing.  If anything, this ’15 from Cupcake instructs us to embrace the real reason we’re wine chasers to begin with— diversity, difference, and a little bit of rebellion.  Not that you have to be up in arms as a wine pursuer, just don’t settle for pattern, and know that there are other interpretations out there of every varietal— and Chardonnay is a grape type that can be translated in innumerable ways.  I was one of those people that judged Chards, before they were even put on the table.  But this bottle made it official, I look for Chards now, before the menus are set on the table, before I take a first step into a grocery store.  Primary gem:  Always expect innovation and new angles and approaches from Chardonnay.  Well, if they’re done this well.